After attempting to steal the guitar of his late musical hero, Miguel, a young boy rejecting his family’s shoemaker ways, is transported into the world of the dead during Mexico’s annual Day of the Dead celebration. There, he must find his great-great-grandfather, the only member of his family who will send him back to the world of the living while allowing him to follow his musical aspirations.

After an impressive run of 11 strong films, Pixar has been a bit inconsistent over the last six years. Their now sequel-heavy filmography, combined with an apparent rush to release as many movies as possible, has led to more disappointing releases, like the poorly advertised Brave, the forgettable The Good Dinosaur (I genuinely forgot this movie existed until I began writing this review), and the “who asked for this?” Cars 3. However, they have not completely fallen away from quality films, with Inside Out completing the difficult task of explaining how essential negative emotions are, and Finding Dory showing that sequels can offer a welcome return to family-favorite characters. Happily, not only does Lee Unkrich and Adrian Molina’s Coco soundly fall into the latter category, but also quickly vaults itself into the top tier of Pixar’s all-time efforts, as well as puts itself in the running for my favorite movie of the year.

This review is just going to be a gush-session, so I will first touch on the small qualm I have with this movie (which does go a bit into spoiler territory). Coco acts as a return to one of Pixar’s favorite tropes, that being a twist of a friendly partner having a nefarious plot revealed toward the end of the film’s second act. This twist has occurred in at least three other Pixar films (the latter two Toy Story films and Up). Even with the film being released 7 years after the last time I saw it in a Pixar movie (I’ve admittedly not seen either Cars sequel, The Good Dinosaur, or Monsters University, any of which could also include the twist), I still have experienced it enough in other Pixar movies that I was wary enough of Ernesto’s character that when the reveal eventually occurred, I was not particularly surprised.

Despite the familiar twist, I truly loved every moment of this movie. There is a lot to praise in this movie, but one of the most striking things about it is, unsurprisingly, the visuals. Pixar has been at the forefront of 3D animation for decades now, so I really should not be surprised at the work that they do, but they constantly surprise me. The detail on Miguel’s fingers as they move up and down the guitar’s neck in order to play chords are breathtakingly realistic, and the film’s confidence in their detail shows. The animators easily could have chosen to hold back and just show Miguel playing at a slight distance, and the effect would have been perfectly sufficient, but instead, they put us right on top of his hands and allow us to see the intricate folds of the finger as they gingerly play the proper chords. Another impressive design decision is that of the film’s dead characters, whose animations are based on the face makeup that is popular throughout the Mexican celebration of Day of the Dead. The skeletal designs go beyond just bones but instead allow each character to stand out among its counterparts, all without leaning into the potential terror that could be attached to a skinless body. 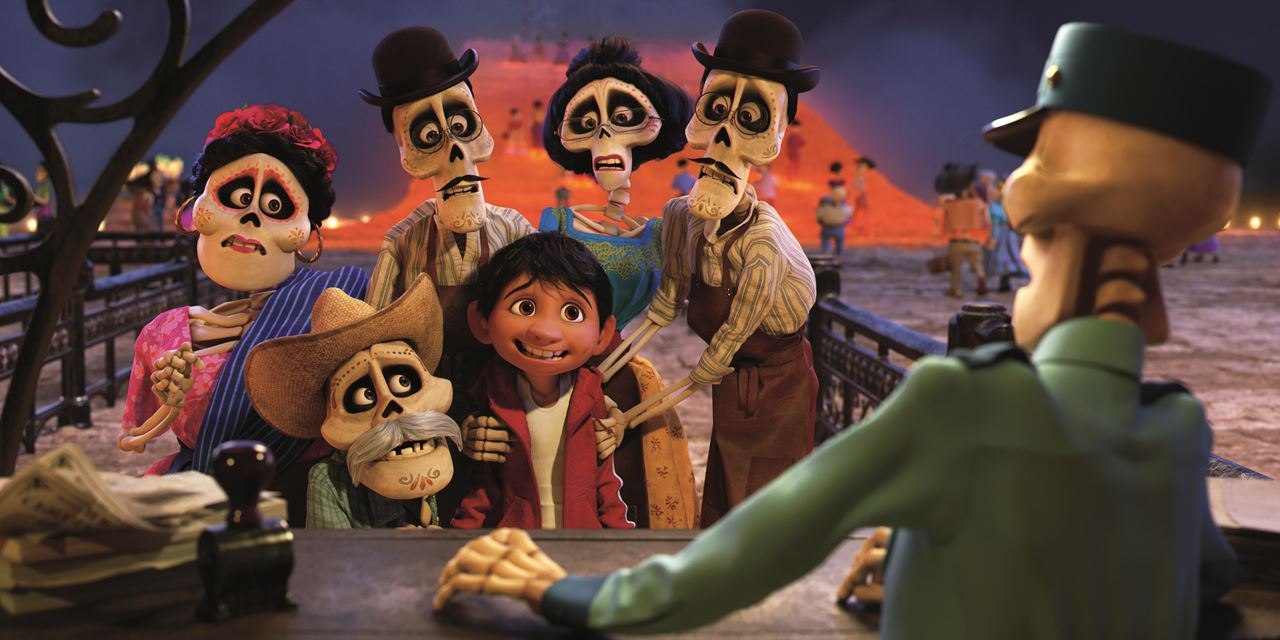 Beyond detail, the overall color of this film is absolutely gorgeous. From the moment the film enters the land of the dead, the audience is overcome with a world of bright, engaging colors that never become dull or boring. Ironically, and intentionally, the colors and lights and movement of the world of the dead are livelier than those of the land of the living, appropriate for a culture that deeply believes that those who have passed away are never truly gone. The movement and color are at its best when connected to the bridge of orange petals that connect the lands of the living and the dead, where the petals constantly rustle and flow as if they are alive themselves.

The film’s cultural theme also vaults the film near the top of Pixar’s filmography. The film credits Lalo Alcaraz, Marcela Davison Aviles, Octavio Solis and Ligiah Villalobos as cultural consultants, and their role in the film is essential to its success, as this feels like a truly Mexican story, instead of just an American bastardization of one. The theme particularly comes through as the film approaches its emotional climax. It’s one of the most heartbreaking moments that I have seen in a movie in a long time, and it had my wife and I recalling as many memories of our recently passed loved ones as we could. As the film concludes, we are reminded that what has passed is never truly gone, and, in one way or another, our loved ones stay with us, guiding us through the rest of our lives, as long as we keep their memories close to our hearts.

The culture of the film comes through in the music of Michael Giacchino. Giacchino is my favorite composer right now, and his connections with Pixar have led to some of the most beautiful scores of the last decade (him getting snubbed by the Academy for his work on Inside Out irks me to this day). The Latin feel is present throughout the film and is never without Giacchino’s trademark emotional backing. The songs as written by Germaine Franco, Adrian Molina, Robert Lopez and Kristen Anderson-Lopez are standouts as well, from the exuberant fun of “Un Poco Loco” to the wide-ranging effects of the film’s musical thesis, “Remember Me.” The film’s last rendition of this song gives the film it’s final and most effective emotional-gut punch and is a moment that brings tears to my eyes, even as I write this, several weeks after I saw the film.

One thought on “Coco Review”