Based on the book of the same name, aspiring actor Greg Sestero (Dave Franco) meets aspiring actor/writer/director/probable vampire Tommy Wiseau (James Franco), and over the course of five years, their friendship burgeons and dwindles, all culminating in the world premiere of their film, the infamously/wonderfully terrible The Room.

I will start this review by clarifying that I have never had the distinct pleasure of watching The Room in its entirety. I have seen enough reviews and discussions of it to get a very base understanding of the experience that I will get when I finally get around to watching it, and I read Sestero and Tom Bissell’s book so I would say I had a fairly strong foundational understanding of the infamous film. I do want to clarify that the original film is far from essential viewing in order to appreciate the work that director James Franco and company do here. It may add a deeper appreciation, but a blissfully ignorant filmgoer can still enjoy this film.

This is not a difficult film to enjoy. Despite a lackluster directorial filmography leading up to this film, Franco is able to take the story of the making of the “Citizen Kane of bad movies” and make it funny without ever feeling cruel, to the point that there are times that you genuinely feel bad for Wiseau. This film easily could have been a mocking look at a deeply troubled person forcing people to bring his absurd film to life, and at times the movie is that (the film’s first teaser wonderfully shows the many takes it took for Wiseau to poorly deliver an oddly structured line that he wrote), but it never leans too heavily into it. Instead, the film shows how far one man would be willing to go in order to succeed in the business he so deeply loves, all while watching his more talented and better-looking friend consistently flirt with a big break.

Beyond all of that, the movie is about the friendship between Wiseau and Sestero, and the casting of the Franco brothers in these roles is an inspired one. Their natural chemistry shines through and you end up empathizing with both throughout the more difficult moments of their friendship. You want Greg to succeed for himself, and watching the hurt grow in Dave’s face with each new way that Tommy finds to take away success works. The elder Franco has the much more difficult task of trying to imitate the strange accent and persona that Wiseau naturally gives off without ever feeling like a caricature and while creating genuine empathy for a person who, if Sestero’s book is even half true, may not have deserved it. But James does just that, carefully balancing between three conflicting components of Wiseau’s personality: the uniquely (and inadvertently) comic mystery, the cruel selfishness that causes him to hurt those around him, and the hurt human being that is underneath all of that, desperately trying to find success and respect. Franco has given some very strong performances in his career, including his Oscar-nominated turn as Aron Ralston in 127 Hours and his disappearing act as Alien in the divisive Spring Breakers, but this is probably the best work of his career.

Scott Neustadter and Michael H. Weber’s script deserves praise as well. Sestero and Bissell’s novel goes into great detail on a wide variety of things (Sestero’s career and life before meeting Wiseau, his time with his agent, living with Tommy, the triggering event that led to Wiseau wanting to create The Room, the hostile set that Wiseau created, Sestero’s relationship with his girlfriend and how it was impacted by his relationship with Tommy, the film’s eventual release). Neustadter and Weber are able to condense that into a script that allows for a tight and quick 104-minute runtime. The film never lingers over any portion of their lives together for too long, all while ensuring we get what we need to get out of each sequence. We get enough out of their time pre-The Room that you can understand why Greg is so kind to Tommy in the early goings while everyone else is quick to talk behind his back, but we also get enough to understand why Greg is pushed over the edge, leading to a confrontation back in San Francisco. The one area that does feel a little rushed is how quickly Wiseau is able to believe that it is a good thing that his dramatic film is playing in front of a laughing audience. But even here, the decision to rush it feels like one that is good for the movie because a scene where, despite everything, Greg comforts a distraught Tommy in the theater’s lobby, plays better than any conversation after the fact would have. It’s a difficult line to play with, having a moment feel disingenuous, all while still playing out better on screen, and Neusdater and Weber make the better choice and have it anchored by the Franco brothers’ performances.

I’m barely scratching the surface on how good this movie is. It’s filled with strong performances and excellent casting, especially when it comes to the cast of The Room. Josh Hutcherson has the right look for Philip Haldiman, a twenty-something actor forced to play an unintentionally creepy teenager. Ari Graynor (who I have been desperately wanting to break out in a big way since her scene-stealing performance in 2008’s Nick and Norah’s Infinite Playlist) is unsurprisingly great as Juliette Danielle, who plays the unfaithful lover who cheats on Tommy’s character with Greg’s. Zac Efron makes the most out of his brief scene as the actor who plays Chris-R, a random drug dealer in the film.  This entire movie is filled with instantly recognizable actors who make the most out of their brief moments in the film. Not to mention cameos from a variety of people in the filmmaking business (including The Good Place’s Kristen Bell, Parks and Recreation’s Adam Scott and director JJ Abrams) discussing the important role that The Room now plays in film history, and an end credits scene that features James Franco’s Tommy Wiseau having a conversation with the actual Tommy Wiseau (playing a party-goer named Henry). It’s a wonderfully odd little scene that is a perfect capper to the film as a whole. 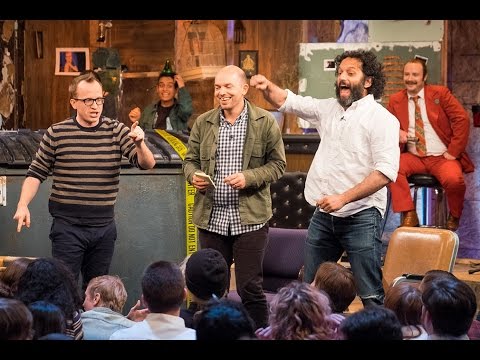 This is such a weird reference I’m making here, but I’m not doing this for you. (Hot tip, if you watch this video, which I think you should, I highly recommend not spoiling it for yourself).

One thought on “The Disaster Artist Review”