After almost 11 years and 20 previous films, the Marvel Cinematic Universe (MCU) finally gave a female superhero a standalone film, with Academy Award winner Brie Larson making her debut as the incredibly powerful Carol Danvers, known as Captain Marvel. Built up during the end credits of the appropriately bleak Infinity War as the hero who could come down to Earth and help the remaining Avengers go toe-to-toe with Thanos (even though we all know Korg is out there, ready to fight with both pamphlets and Miek’s dust in a jar in hand), the hero had a lot of hype to live up to, both in her powers and her film. So do they live up to the high expectations?

This isn’t a bad movie, by any stretch of the imagination. It’s just a pleasant and fun enough movie that follows a year where the MCU gave us the multi-Academy Award-winning Black Panther and it came out just months after forkin’ Sony, of all companies, gave us easily the best superhero movie of the 2010s with Spider-Man Into The Spider-Verse. Also, it had to live up to the expectations set up in the aforementioned credit scene of Infinity War where the character is built up to be the one shed of hope that we have leaving that theater, and honestly that’s pressure that I’m not sure anyone could have lived up to, let alone a hero whose film story has five credited writers and whose directors’ credits only really included more standard dramatic fare.

Unsurprisingly, this film, which falls in a franchise that has done exceedingly well in casting its heroes and, of late, its villains, is lifted up by its incredibly game cast. Brie Larson (whose desire to have more diverse people at the table when it comes to film press does not equate to hating white men, which is apparently a little known fact to white men) is wonderfully charming and funny, with pretty much instant chemistry with everyone she acts against and watching Danvers really come into her powers in the last act is a genuine delight with how literally bright she shines (even if the action sequences at this point are a tad unfocused). Samuel L. Jackson is having way more fun than an actor of his caliber would really be expected to be having in his eighth official appearance in 11 years. Ben Mendelsohn, who has been great in villainous roles in Rogue One and Ready Player One, plays Talos, the leader of the shape-shifting Skrulls at the center of this film with a wonderful glee, even while covered in green makeup. 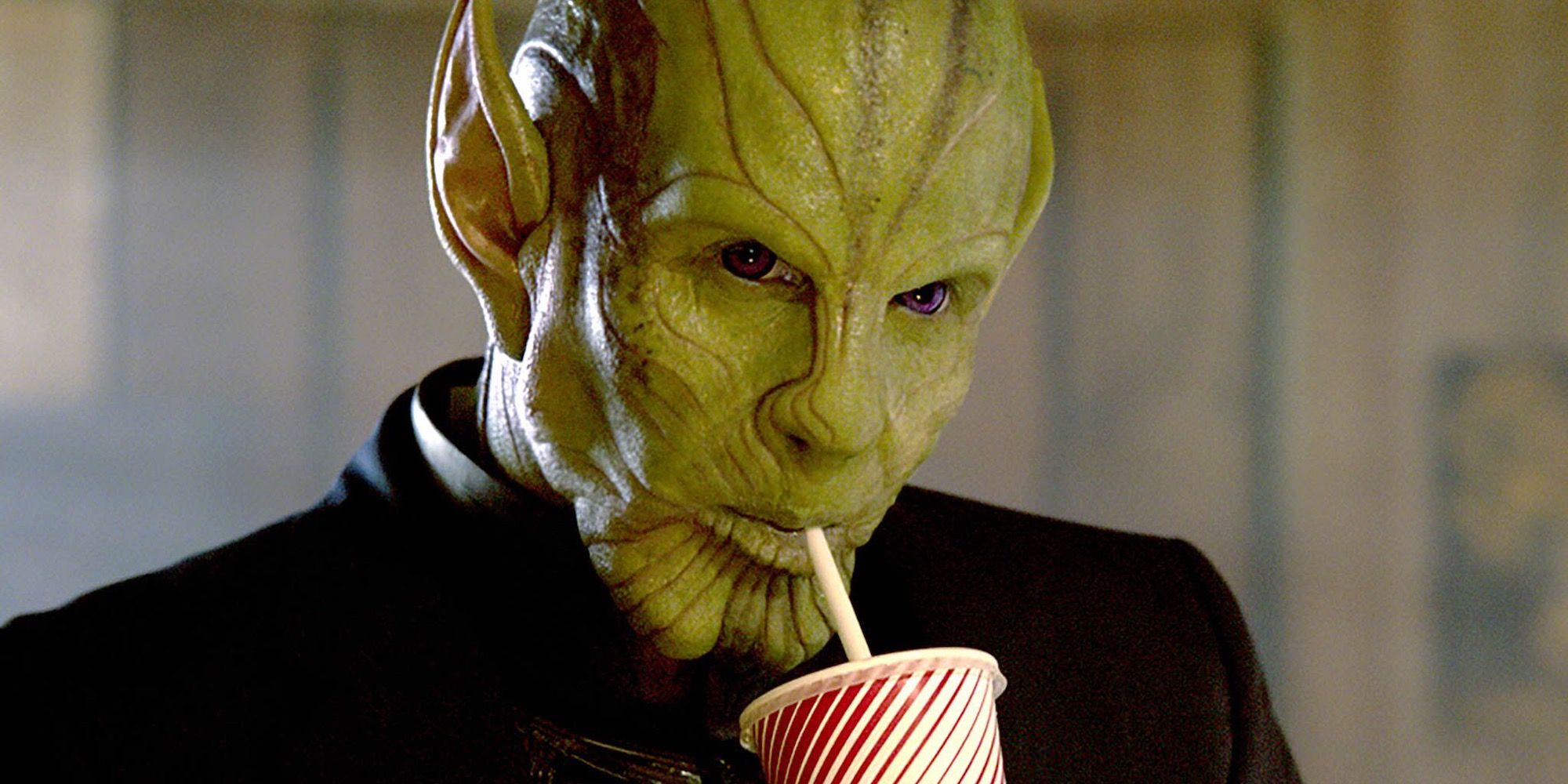 One story point really stood out for me. However, it does go into spoiler territory, so just a quick heads up that the next paragraph will be a Significant Spoiler. So beware.

The Skrulls are a pretty significant race of aliens in the realm of the Marvel comics, with their shape-shifting abilities causing havoc for heroes since their first appearance in 1962. So when they were announced as having a role in this film, everyone felt like the universe was about to set up the next phase of the franchise, post-Thanos, with us constantly questioning who is the real hero and who is a Skrull spy. This movie basically says “yeah, fork that” and makes the Skrulls the victims of a Kree genocide who are merely looking for a new home where they can escape persecution. So, yeah, a movie whose advertising focused on the fact that Marvel was finally giving a female superhero her time in the limelight ends up basically being about refugees and how the popular understanding of a group (which is the one that Carol was trained to believe in) might actually be just a giant lie supported by hate, which is genuinely very dope and helps this movie fall into the realm of Black Panther before it, where its a superhero movie with an important message (with the added benefit of this franchise doing a Hard Pass on what would be an overly-repetitive question of Who Is Real!?!?1?”)

So that story point really works on its own, but Carol’s arc never feels like it meshes with it as well as it should. The rest of the movie is about her coming into her own as a hero by finally gaining access to the full spectrum of her powers, but that honestly feels like its own thing and her own motive, instead of her being motivated by the terrible things that she just learned happened to someone else. (this next sentence is also a bit of a spoiler). Her role in the final battle feels more like it is driven by the lies she was told instead of by the genocide those lies had her (presumably?) participate in. (End of spoiler sentence) And I don’t think that this was intentional by any means, I just think its a predominant victim of this film’s many storytellers that the final act is not nearly as focused as it could have been. Coming out less than 90 days after the gorgeously and tautly executed final act of Spider-Verse doesn’t do the film any favors, either.

So yeah, parts of this movie really work. Other parts are frustrating, but even those parts are able to coast on its talented cast and a scene-stealing cat (#Goose4Life), and that’s fine. This isn’t a movie that is going to fall into that Iron Man sequels/first two Thor movie range of movies that most fans of this franchise kind of shrug off, but I also don’t see it being as widely accepted as something like Black Panther or Iron Man either. And, obviously, that’s based on the general understanding of how these movies fall for people. Everyone’s mileage may vary, and everyone’s list is just as correct as anyone else’s and should be respected. Unless that person’s list has The Incredible Hulk in the top five. Because that person is a Hydra agent.