Six years after he was initially teased in the mid-credits scene for The Avengers, Thanos finally arrives in the Marvel Cinematic Universe, in active pursuit of the six infinity stones which, when paired with his gauntlet, will allow him to destroy half the universe’s population with the snap of a finger. It is up to 18-films’ worth of heroes to try to stop him.

(As the title says, this is a review that goes pretty deep into spoilers. When I left this movie the first time, I was hung up on the ending, and to avoid discussing that in a review felt disingenuous, so I’m discussing this on every level. Deal with it)

For ten years, Kevin Feige and his wide range of actors, directors, and writers have slowly been building up to this film, so to say there was a lot of pressure to get this right is a bit of an understatement. Although it was far from a make-or-break moment for the franchise (if the DCEU can keep going after Justice League was the lowest grossing film in the franchise before inflation adjustments, this franchise can take a hit), the expectations were high on this movie. Writers Christopher Markus and Stephen McFeely and directors Anthony & Joe Russo had to find a way to seamlessly connect twenty heroes, many of whom are in different galaxies from each other, all while effectively introducing us to a villain we’ve only gotten threatening glances of since his silent debut in 2012.

It was a giant task, and the four men listed above were equal to the task, mostly. The film has its issues: the battle of Wakanda, despite some fun moments, feels deeply low stakes compared to the battle on Titan; Wakanda, in general, feels like a shell of itself when compared to what it looked like in Black Panther; this franchise still has a shockingly poor grasp on CGI, especially considering how many of its characters rely on it; Thanos’ children feel thinner than their CGI, making the use of Carrie Coon as Proxima Midnight even more confusing. But considering this film’s massive size, and the issues that are logically tied to that, these issues feel otherwise pretty small. Especially considering this movie did something that I never thought they could do: make me fear Thanos, while still making him feel like a person. Or as close to a person as a Hulk-sized purple dude who wants to genocide half the universe can plausibly feel. 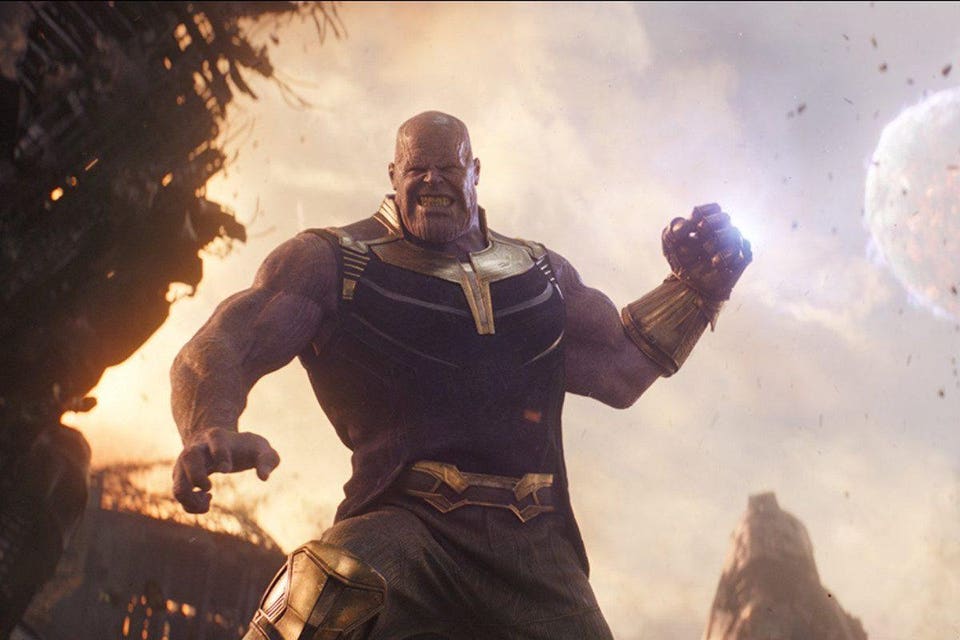 A lot of credit goes to Josh Brolin’s performance as the Mad Titan. His delivery throughout the film easily bounces from deeply threatening (“I hope people remember you” is a weird misdirect away from being one of the best kill lines I have ever seen in a movie) to deeply sad (when he reminds Gamora that she used to tell him how much she hated everything about their life together every day, I found myself empathizing with the murderer), and he relies on both to make this character work. We needed to feel like this character could destroy everything and everyone that we have spent a decade rooting for, but, especially after Michael B. Jordan’s performance as Erik Stevens, we needed to feel like this character had a decent reason for wanting to destroy half the universe. Wanting to ensure that the universe has enough resources to sustain its wide populations is a worthy goal. Blindly killing half the universe’s population at random is not the best way to go about it, but, you tried, I guess?

Either way. Brolin, alongside the writers and directors, made this character, who I was certain would fail (on a character level) one of the best villains in a franchise that has finally found its footing on making interesting adversaries.

Thanos is far from the only thing that works here. In fact, just about everything works. The film, despite being one I have described as bleak any time I talk about it, has a wonderful amount of humor, giving all the usual suspects an opportunity to earn a solid belly laugh. From Dave Bautista teaching audiences a lesson in camouflage, Tom Holland’s absolute glee as he interacts with portals, Pom Klementieff’s mean face and promise to “take ass and kick names,” Chris Pratt over-compensating the depth of his voice, and Chris Hemsworth’s inability to correctly identify animals, this comedy in this movie is top notch. The action, for the most part, is fun as well. The battle on Titan is about as exciting and tense as this franchise has ever been, and even the battle of Wakanda, despite being realtively low on genuine stakes, gives us Captain America and T’Challa sprinting ahead of the rest of the army rushing their opponents, Thor’s electic entrance into the battle, Bucky picking up Rocket so that he has a better angle to shoot, Black Widow and Okoye ensuring that Scarlet Witch is not alone, and Thor introducing Groot as “my friend, Tree” before Groot declares “I am Groot,” causing the wonderful “I am…Steve Rodgers” as a response. Even when the action in the movie fails, the dialogue ensures that it is still a damn joy.

Before it isn’t. If for some reason, you’ve rolled the dice on this review, in hopes my spoiler warning was an exaggeration, please know, it isn’t. I’m about to go discuss this film’s final five minutes. Some very significant things transpire in this movie, and I’m about to talk about them. Please know this is very real. I’m rambling but it is very important to me that you know how little I am messing around here. Do not roll these dice. You’re going to lose. You’re going to get a *googles what a bad roll in craps is* twelve? I don’t know. I did not dive in on this joke. Anyways, here come spoilers.

So, at film’s end, the only heroes who are still living includes the original Avengers (Captain America, Iron Man, Black Widow, Bruce Banner, Thor), James Rhodes (War Machine), Rocket and Nebula (of the Guardians of the Galaxy), and then T’Challa….’s friends Okoye and M’Baku. Not included in that list are T’Challa himself, Spider-Man, every other member of the Guardians, Doctor Strange, Scarlet Witch, Sam Wilson, all of whom are victims of Thanos’ successfully retrieving all six infinity stones and the ensuing snap, which wiped out half of the universe. So, yeah. This movie does basically the exact opposite of what I expected them to do. Thanos succeeds in getting all of the stones (I assumed he would have one left to get in next year’s follow-up). The cast member’s whose contracts are notably at their tail end are the only ones who are still alive when credits roll. The billion dollar man, Chadwick Boseman and pitch-perfect Spider-Man Tom Holland literally turn to dust before this movie ends. It’s an emotional gut punch and a jaw-drop that this franchise has never been able to deliver. Too bad it almost certainly won’t stick.

Which I’m mostly okay with at this point. At first, after the tears dried, I was angry that the franchise did the exact right thing in the worst possible way, knowing that the most of these people are almost certainly getting sequels, so even before the credits finished rolling (even before the title turned to dust, because these people are sociopaths, toying with my emotions), I was trying to guess how the writers would reverse everything. However, the more I think about it, the more I feel like this was the only way to do this. The film had to end with Thanos getting all six stones. Considering his powers and strength, not having all six stones would feel like we were simply delaying the inevitable. Same with us not getting to see The Snap or the results of said snap. We had to watch some of our heroes die, or else it would feel like a total cheat. Finally, if we watched the people we expected to die simply turn to dust while knowing that their contracts were at their end, we would feel cheated. Steve Rodgers deserves better. Tony Stark deserves better (and almost got better, before his death scene took a total 180). Both will likely get better in next year’s follow-up. I just hope the follow-up focuses more on Captain America’s confident declaration of “You can’t trade a life for a life,” instead of Doctor Strange’s implication that multiple universes exist. One is simple and cathartic. The other is mentally exhausting and I already don’t care.

So, yes, this movie works better than I thought that it did, and I hope that it holds up a year from now when the writers and directors clean up the dust.

Pun deeply, deeply intended. Additionally, I hate myself for it.

(Before I leave, the last frame of this movie, pre-credits, is easily the best final frame of any superhero movie. Don’t @ me. The villain is smiling. And not even maliciously. He’s just peacefully watching a sunrise. It’s perfection. Simple perfection. And it’s all I need to be excited for Avengers 4: Infinity Sunrises)