A CGI-monstrosity and his brood of poorly rendered-insect creatures take advantage of the world’s inexplicable depression over the death of “beacon of hope” Superman in order to unite three MacGuffin-boxes in order to make a new version of his bland-looking planet. Wonder Woman, alongside obvious-CGI robot boy, punchline-machine Ezra Miller, Khal Surfer-Brogo*, a cardboard cutout of Ben Affleck and digital-faced Henry Cavill join up to fight in a studio that is filled with green screen walls and hastily written jokes.

That plot description is, admittedly, harsher than I actually feel about this movie, but it isn’t necessarily a lie, and I’ll expand on as many of these points that I imply in the amount of time I can talk about this movie without feeling a dull rage.

It’s a different rage that I get when I think of how terribly Batman vs Superman wrapped up its “plot.” This is the anger of someone who knows that this franchise can do better, and is getting tired of having to hear about how well these movies are seemingly setting up promising future films. I agree that where this movie leaves its heroes seems promising for a previously dull and dark franchise, but that cannot be sufficient for the franchise’s fifth film.

This movie should work in its own right, not just as a setup for the future. It has Wonder Woman (the impeccable Gal Gadot), arguably the most exciting superhero we have on film right now, surrounded by a surprisingly well-cast group of heroes. Ezra Miller (The Flash) and Jason Mamoa (Aquaman) are both inspired choices for their respective characters. Ray Fisher received strong reviews as Muhammad Ali in an Off-Broadway play about the boxer, so getting him to play a lesser-known hero (among those like me, who only vaguely knows about the existence of Teen Titans) was a strong bet. I have genuinely liked Cavill’s Clark Kent/Superman when he isn’t forced to brood, alongside professional-brooder Batman (Ben Affleck, who surprised me in BvS but seems to have taken the critical reaction of that film to heart).

And yet, this is what we get. I think the blame here has to go to Zack Snyder, the film’s credited director (he stepped away earlier this year after a family tragedy, allowing Joss Whedon to step in and finish the film). I don’t think Snyder is a bad director, necessarily. I’m not a huge fan of all of his movies but can respect the way he works with his cinematographer to create some captivating images. I just think he was the wrong choice for this franchise. From the start, it hasn’t felt like he has had the strongest grasp on Superman’s character, with the character’s “beacon of hope” characteristic being frequently referenced but rarely actually shown, and then the rush to “kill” the character at the end of the cinematic universe’s second film leaving a terrible taste in my mouth. Additionally, the aforementioned second film was so overly long and humorless, that much of the present film’s issues feel like an overcorrection.

After the previous film’s two and a half hour runtime (followed by a three-hour ultimate edition) was criticized by critics, Warner Brothers apparently demanded that this film be kept under two hours. Although runtime was an issue in the film, the main issue was how Snyder and company utilized the time they were given, and that issue persists here. In two hours, we have to meet three new heroes, learn their powers, meet our villain, Steppenwolf (technically Ciarán Hinds, but more accurately a terrible CGI creature), understand his goal and purpose and resurrect another hero. The hero introductions get, unsurprisingly, short-changed (particularly for Cyborg), to the point that each of our heroes feels more like an archetype than an actual character (including Wonder Woman, who doesn’t get enough time to make an impact, outside of the bank robbery scene). Steppenwolf might be the worst filmed superhero villain in memory (I wish that, instead of him, it was the band that sings “Magic Carpet Ride” fighting our heroes. At least I would have remembered that). The resurrection of Superman admittedly does lead to the film’s only interesting fight scene, as the confused god absolutely wrecks his eventual teammates. However, the film then spends an undue amount of time with Clark Kent regaining his memories through a stroll down memory lane with Lois Lane (the tragically present Amy Adams). Although I think what this scene does is important, it runs on long (it actually takes place over two scenes) and isn’t worth losing time with our newer heroes. So, although I understand the decision to demand a shorter cut, the filmmakers are not competent enough to use the time that they have wisely. I’m almost certain that this film’s director’s cut (if we ever get to see it, considering Snyder walking away from the film) would have similar issues.

The film’s other issue is also one of the only strong points: the humor. I deeply appreciate the film’s attempt at lighter moments, considering how much of a slog that Batman vs Superman could be (except the intensely over-the-top Jesse Eisenberg, who I adored in that movie. Come at me.) Aquaman’s encounter with Wonder Woman’s lasso of truth was a genuinely entertaining moment, as was watching Superman’s eye follow a shocked Flash in super-speed mode.

However, it’s clear that moments of comedy are not this franchise’s strong point because they often feel forced. The film’s main punchline deliver is Ezra Miller. Yet, most of The Flash’s funnier moments were heavily advertised in the trailers and commercials (which were inescapable these past few weeks), but, I must admit, Miller’s bug-eyed expressions often left me with a smile on my face, despite the tiredness of most of his jokes (he inexplicably says “Dostoyevsky” to a rescued Russian family who didn’t need to exist).

Lastly, the CGI. How does a superhero movie with a $250-300 million budget look this bad? My wife pointed out that Steppenwolf made The Beast from this year’s Beauty and the Beast look like an Andy Serkis character. The horizon behind Kent as he talks to Lane was so distractingly fake that I sang a song about green screens to myself during the scene. Cavill’s digitized-out mustache left him in a bit of an uncanny valley situation. Cyborg never once looked believably-real (and don’t tell me that it’s hard to do a cyborg. Ex Machina deservedly won Best Visual Effects despite having a $15 million budget for the entire film). Danny Elfman does the score here. Outside of sampling John Williams’ original Superman score and the theme song to Batman The Animated Series nothing in particular really stands out here, which is the least of this movie’s problems (I almost forgot to include this section, I got caught up in everything else.)

Justice League could represent a breaking point for this franchise. Projections at the time of my writing this has its domestic box office for the opening weekend at $94,000,000, which is the lowest of the franchise. Using 25% as a very kind estimate of what percentage of the final gross the opening weekend will be (25% represents what Wonder Woman did, with its positive reviews and strong word of mouth), that puts the domestic take at $376 million, which, when combined with its worldwide take, would likely allow the film to break even (when you take advertising and what the movie theaters themselves get from ticket sales). Will barely breaking even and a crowd reaction that seems to fall soundly in the middle of the franchise (between BvS and Man of Steel, with Suicide Squad and Wonder Woman book-ending the average ranking) be enough for Warner Brothers to continue this universe? James Wan’s Aquaman is in post-production, with an anticipated release date in thirteen months. Casting is still happening for other films, with Zachary Levi recently signing on to play Shazam, which may suggest that the universe continues, although the Flash’s film (the inexplicable world-resetter Flashpoint) is in a bit of writer/director limbo, which might suggest more hesitation. But, could hesitation/universe-scrapping mean the removal of Wonder Woman 2 from the docket? That character truly offers a beacon of hope for this franchise/our dour world, and I would gladly sit through bad films in order to watch what Patty Jenkins and Gal Gadot give us (how Jenkins wasn’t just given a blank check to make the sequel, I will never understand). Is Wonder Woman enough to keep the universe running? Can they scrap the universe and just make Wonder Woman movies? Will they scrap everything, leaving Wonder Woman an innocent casualty? Only time will tell which option they choose.

My first day of college orientation, the president of my university gave a speech to the incoming freshmen. The theme of his speech was “‘good enough,’ isn’t.” These three words came back to me as I reflected on this movie and this franchise. Despite my many issues with this movie, I think I could be swayed to think that this is “good enough,” at least when you consider it among some of the franchise’s other efforts (Wonder Woman being the outlier). It’s not blandly dark. It seems to have a solid grasp of who its characters are supposed to be (even if they just fall into static archetypes, at least those archetypes match the proper understanding of the characters). It provides a glimmer of hope for what the franchise could be. It’s good enough. Which can’t be good enough. Not anymore.

The answer to the DCEU’s problem is obvious. 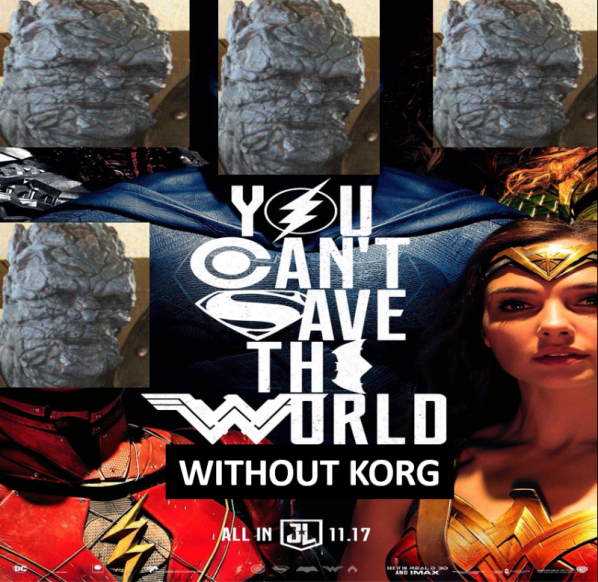 One thought on “Justice League Review”